I am finally able to announce that the paperback edition of the third book in The White Pine Trilogy is available. The Kindred Spirit Bed & Breakfast will tie all three books together in a way you have not yet imagined. This book is much longer than the other two and therefore you will see a price difference which has been determined by Amazon (even though they have not yet gotten around to changing the estimated page numbers of 160 to 368 actual pages.) If you are a 'real' book reader and have been waiting to complete my series, have at it! Let me know what you think by leaving a review at Amazon.

Book One is Free!

Hurry,  If you haven't started to read this series, start The White Pine Trilogy right here with \Book 1.  The Tangled Roots of Bent Pine Lodge is free this weekend only !  Try it out and see if you want to continue on with this family tree.  Find out how all the characters are related, while reading about several romances along the way.  I'm sure you're going to love it.     Jane O
Posted by Jane O' at 3:54 PM No comments:

Book 2 Goes for a Visit 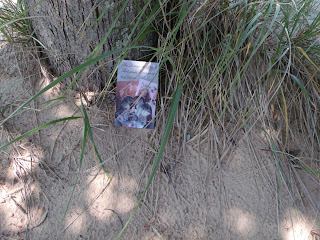 The Dunes & Don'ts Antiques Emporium, #2 in The White Pine Trilogy went to Muskegon, Michigan to visit an actual dune.  It snuggled into the dune grass to hide from the strong wind that day.

How lucky I am to live near one of the greatest bodies of water on Earth, Lake Michigan.  Did you know that it is the only lake of the five Great Lakes to be totally surrounded by the United States?
Facts:
1.  It's 22,384 square miles
2.  It's 307 miles long
3.  It's 923 feet deep at its deepest point
4.  It is 118.1 miles wide (no, you cannot see Milwaukee from Muskegon)
Lake Michigan is bordered not only by Michigan, but also Indiana. Illinois, and Wisconsin.
5.  It is sometimes referred to as The Third Coast of the United Stated, after the Atlantic and Pacific Oceans.
6.  The dunes found on its eastern shore is the largest freshwater dune system in the world.
7.  In several places the dunes rise several hundred feet above the surface of the Lake.
9. The water is clear and cold, usually between 55 and 80 degrees, but because of the westerly winds the water's surface is moved toward Michigan and the lake at the shoreline can be quite warm in the hot summer months.

And guess what else?  No Salt, No Sharks!  No that's something to brag about.

There, now you know a little about Michigan, and why I love to write about it.  Jane O
Posted by Jane O' at 3:08 PM No comments: