I've been working very hard on my new series.  I'd love to share just a small sample of what it is about.  Here is a paragraph from one of the early chapters. 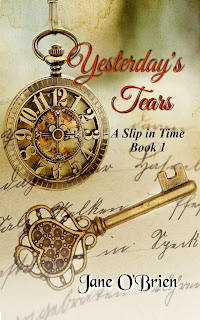 Fran placed the key in the lock and turned, hearing a satisfying click.  She pushed the lid all the way back, because it had a tendency to fall forward.  First, she lifted out the prairie style skirt.  It was not old – well probably about 30 years old by now.  Gram always took part in the Heritage Days Festival and she liked to wear a period costume, so she had made this for herself.  It wasn’t anything fancy.  It was meant to be a practical dress worn for travel or everyday use during the 1850s to 1880s.  When Fran pulled it out, the pantaloons and camisole fell out along with the rest of the outfit.  How strange that they did not wear underwear as we know it today.  She couldn’t help herself.  Out of curiosity she tried on the entire costume.  She was the exact same size as her Gram; her family had often laughed about how Fran had grown to be a carbon copy of her.  Fran slipped on the pantaloons, tying them at her waist with the pink ribbon that was threaded through the casing.  Next, she took off her bra and put the camisole on, lacing it up at the front, tying the bow at her collarbone, her breasts straining at the thin muslin.  It seemed strange not to have the restricting under wires and irritating straps binding her, but she enjoyed the freeing feeling.  She looked at her feet and continued on with a pair of knee high stockings Gram had folded with the clothes.  They were a simple black wool and threatened to fall down until she tucked them under her pantaloons at the knee.  She noticed a drawstring on the pantaloons, which she tightened in order to hold the stockings in place.  Next, she pulled the dark grey skirt over her head and pulled the drawstring at the waist.  She tied it firmly in the back, tucking in the leftover pieces of string.  It appeared, by the amount of tie left over, that she was quite a bit thinner than Gram.  Finally, she put on the white blouse.  It was her favorite piece, with its high standing collar and the bit of ruffle down the front alongside the buttons; it was made from a more delicate fabric, and not meant as a work top.  The sleeves were gathered at the shoulder which created a small poof.  As Fran finished with the last button, she could see that she had made an error in putting on the skirt first.  The top was meant to be tucked in, so she had to undo the ties of the skirt and make the adjustment.  Only one thing was left to complete the outfit – shoes.  She looked inside the trunk again, and of course there they were, wrapped in a plastic bag to keep any dirt on the bottom from the rest of the contents.