It's finally here and ready to order in both paperback and Kindle.  Order a book today, and leave a review when you are finished on Amazon.  Tell me about it and I will enter you in a drawing to win one of 3 autographed copies of book 2 in this series, which should be coming out this summer. 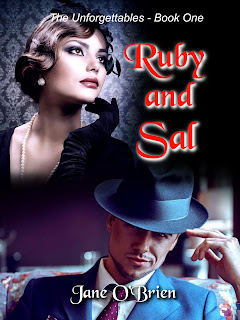 Excerpt from Ruby and Sal

I'm waiting impatiently for the proof of my next book to arrive, and as soon as it does, if all is well, it will be available in Kindle almost instantly and then in paperback in a few days. So while we wait, I thought I should offer you a small piece of chapter one.  It's just enough to set the stage, but believe me, the subject matter is much more than you are reading here.  Enjoy!

Ivy stood outside the door of the nursing home and waited.  She waited for her spinning head to clear.  She waited for her breathing to even out.  She waited for her hands to stop shaking.  It happened each time she came here – the heart palpitations and shortness of breath.  She wondered if she would ever get over the feeling of loss when there was no loss as of yet.  Each and every time she needed to give herself a pep talk before she went in.  “I’m a grown woman.  I can handle this.  I can do it.”  Then she took a deep breath, and putting her own feelings of hopelessness aside, she placed one foot in front of the other and walked in.
The lobby was bright and cheerful.  Fall decorations of leaves and mums lined the bulletin board, announcing the week’s activities; Crochet and Knitting Club on Monday at 9:30; Bingo on Tuesday and Thursday at 3:00; a Sing-a-long in the cafeteria at 2:00 on Wednesday; Wheelchair Volleyball on Friday at 10 a.m., and a Fish-fry on Friday at 5 p.m.  All-in-all it was a wonderful place.  Gone were the odorous smells of old-folks homes as in days past.  This home smelled like soap and air freshener.  The nurses and aides were always smiling, happily bringing cheer to each room as they entered.  They called each patient ‘honey’ or ‘sweetie’ and never seemed to tire of helping those in need.  In Ivy’s opinion they were God’s angels on Earth.
Ivy walked the hallway toward room 206 and she greeted each person she passed.  Some were in wheelchairs, while others moved slowly with walkers, most likely getting in the required steps for the day.  She greeted Mrs. Moore who blew her a kiss each time she, or anyone else, passed by.  Then there was Mr. Barnes, a long-time resident, who always asked her the score of the Detroit Lions game, even when it was no longer football season.  A few residents didn’t seem to know where they were at all; they sat quietly in a perpetual doze, wrapped in blankets as their heads lolled forward.  But no matter what the level of alertness, each resident was treated with respect and given the dignity they deserved after living a long life, and being contributing members to society.
Ivy stopped in front of the door she was seeking, took a deep breath, and with a quick knock, entered.  Her grandmother was in a tilt-back chair, watching game shows, her feet propped up on the raised footstool.  Ivy always felt awkward at this point, not wanting to disturb her grandmother’s TV.  How she longed for the days when her Nana’s face would light up as she entered the room.  “Hello, Dear.  How was your day?” she would say every day after school.  And then later, “Ivy, darling.  How are you?  Is everything okay at work?  Tell me about it.”  Her never-ending patience as she listened to Ivy’s tales and woes always amazed her.  Since she was an only child and her mother had died at a young age, her grandmother, a widow already, had moved in and helped her father raise her.  Olivia had become a mother and a grandmother all rolled up into one.  Maybe, Ivy often thought, if she hadn’t had so much attention showered upon her, she wouldn’t feel so angry at times at how things were now.  She had chastised herself many times about her disappointment in her grandmother.  ‘How dare she, leave me like this, with no one to talk to except GG,’ she would think, but immediately after, she would feel selfish and immature.
Olivia Morton was Ivy’s grandmother on her father’s side.  Her father, Thomas, was living in Los Angeles now and rarely came to see his own mother.  Ivy understood that he had a job, a new wife, and other children – young children, but she never understood why he ignored his mother the way he did.  He said it was too hard, seeing her like this – he couldn’t handle it.  Well, it was hard on Ivy, too, but someone had to show up once in a while and make sure she was taken care of.  So she did what she always did each visit, she put on a big smile, and called out loudly, “Nana, it’s me.  Ivy.  How are you this morning?”


The old woman raised her cloudy grey eyes, and looking straight at Ivy, she said, “Who?  Who are you, now?”
Posted by Jane O' at 7:12 AM No comments: