Yesterday's Blood has been receiving some very good reviews.  I am honored that so many of you, either on Amazon or Goodreads, find my books enjoyable. In case you missed it, I thought I would post  a review by Jena C, Henry.  Jena is an author of three fun novels, The Golden Age of Charli: Rsvp; The Golden Age of Charli: Bmi; and The Golden Age of Charli: Gps.  She writes about living in the Golden Years in a very relatable way that had me laughing all the way to the end. I highly recommend her books to boost your spirits and whisk all your troubles away.

Here's her review of my latest book.  Thank you, Jena, for your awesome insights.

Five Stars
I know readers can’t wait to read Yesterday’s Blood, the fifth book in the A Slip in Time series by Jane O’Brien. So, let’s get straight to my thoughts.

Yesterday’s Blood, in spite of the ominous title, is filled with charm and tranquility. Picture this. “Inside the house the sisters moved together in the kitchen just as they had many times over the years, in one century or the next.”
As you can tell, the 1881 life for the 2025 sisters Francine and Dora is now pleasant and normal.

Book 5 paints a lovely picture of the growing towns of Twin Lake and Holton in 1881. Life is no longer frontier living. The towns are bustling. Houses are being built and businesses are opening and thriving. Life is good for Francine and Dora. They each have a man who loves and adores them. They each have found a place in the community.

What about the newcomers? We become better acquainted with the new Doctor, and the other male visitor off the train. We spend more time with Ruth and her family, as well as her friend Mavis. Mavis endures some sadness and problems. But for the most part, contentment abounds. Babies are born, cakes are baked, herbs are collected, marriages are celebrated. The orphan train comes to town. All of these happenings are written in the author’s lovely way with words.

Now what you really want to know about is Daniel, right? Well, all I will tell you is that his story took a turn I wasn’t expecting. And by the end of the story, the blood in the title reveals itself, along with some worries about the future.

I highly recommend Book 5. If you haven’t read the series, you may want to read the earlier books, because this series has so much depth, you will want to take it all in. Thanks to the author for an advance review copy. This is my honest review.

Email ThisBlogThis!Share to TwitterShare to FacebookShare to Pinterest
Labels: Reviews 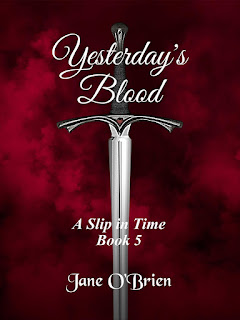 I've been known to neglect this blog, and I'm afraid this is one of those times.  I get so involved in the marketing of the new book and then the writing of the next one that I forget some of my duties. I am full on in writing mode for Book 6, and my head gets lost in the world I have created.
In case you have not yet begun to read Yesterday's Blood, Book 5 of A Slip in Time, I thought I should remind you of how it begins. Here's an excerpt from the Prologue.

He pulled it out to look at the blade again, and when he did, he accidentally nicked his thumb on the hand holding the sheath.  A trickle of blood began to run down his fingers.  The moment he saw the drop of blood moving, he understood what the dark stain on the leather was.  It was blood.  Maybe from a battle or a fight, or maybe a nick from skinning a squirrel; whatever the reason, Daniel instantly understood what was coming next.  He grabbed his nearby cane for balance to try to stop it, but it was too late.  He heard himself yelling, “NOOO!”
Posted by Jane O' at 5:46 PM No comments: 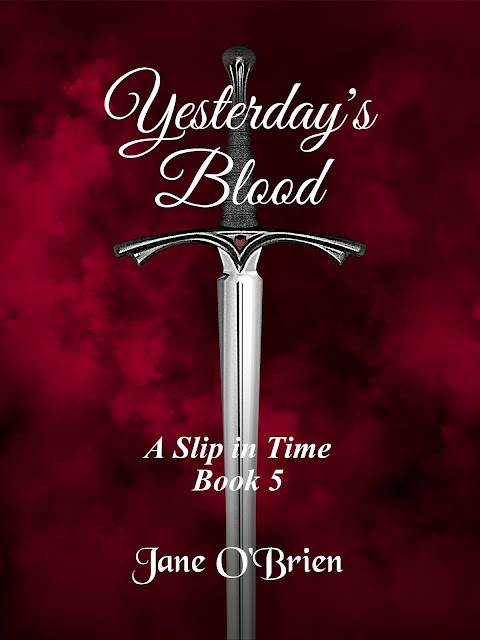 It's finally here. Book 5, Yesterday's Blood has been released in both Kindle and Paperback. Continue the saga with the next book in A Slip in Time. Here's a little bit about what's to come:

Yesterday’s Blood, Book 5 of O’Brien’s series A Slip in Time, begins in the year 2025 where we last left Daniel Kent, the deputy sheriff.  Having come across some heirlooms in an old secretary drawer, he handles each one carefully wondering who they belonged to and how they were connected to him.  After looking into his genealogy, he discovers a name on a Civil War medal which not only is on his family tree, but is the same name as his own.  Puzzled, he picks up the Bowie knife next, but as he does so, he nicks his finger, causing a flow of blood to drip onto the leather case.  Once the droplet in his ‘present time’ touches the stain from the ‘past’, Daniel is thrown into a trip he had not expected to take.

Where will Daniel land?  Will he end up in a strange place and a different century than his own; will he be with Dora, his ex-wife, who has gone before him back to 1881?

Dora was eager to return to the past and the love of her life, but what will she find when she arrives?  Is Wade available, and if so, does he still want her?

Francine and Luke are excitedly making plans to start their family.  The orphan train is once again coming their way.  If they are able to get any children, Fran wonders if she will be able to stay in the 19th century and continue her life as the mother she has always longed to be. Or will the Universe upset everything and send her back, leaving Luke alone as a single parent?

Best friends, Ruth and Mavis, still long for a man to fall in love with. They dream about a handsome stranger who will step off the steam driven train at the depot in town.  Will these young women each find a suitable match in the small town of Twin Lake, or is there an unknown person waiting on the horizon for each of them?

These are the many questions that will be answered in Book 5.  With new people arriving in town, bringing with them troubling dilemmas, life has never been more exciting in West Michigan.  Through joy and sorrows, weddings and babies, arguments and bloodshed, follow the characters you have grown to love in Yesterday’s Blood.