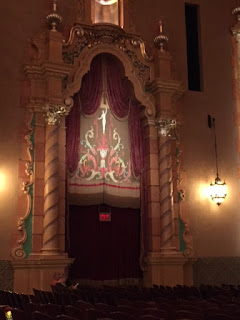 On Saturday night, I was able to attend the Buster Keaton International Film Festival at the Frauenthal Theater in Muskegon, Michigan, my hometown.  I grew up going to this theater which was called The Michigan Theater then.  But on October 7th I saw it through different eyes.  It is truly a magical place, and a throw back to an era long gone.
If you have read the Unforgettable series, you will immediately recognize the Frauenthal as the theater where Maisy meets a mysterious woman who gives her sage advice, while attending that very same film festival.  It is the same place where she also meets a young woman who will become important in her life, someone instrumental in solving more family tree mysteries. 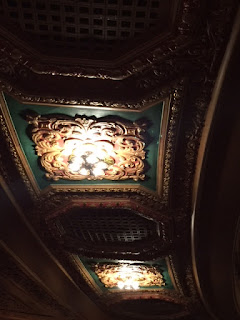 I wonder, now, when I was a child going to see the newest Walt Disney movie, did I ever look up to see this glory?

And as a teen when I watched Beach Blanket Bingo, was I so intent on Annette Funicello's hairstyle and the style of bikini she wore that I neglected to look at the scrolls and artwork? 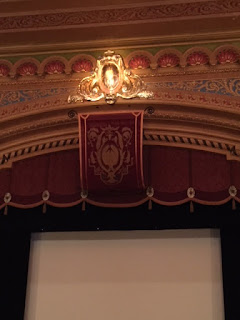 Or when we held our sides laughing at It's a Mad Mad Mad Mad World, was I too busy wiping tears from my eyes to see this ceiling? 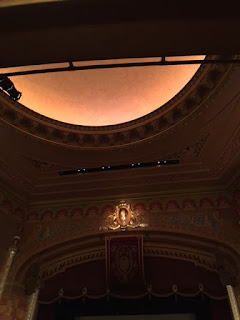 But more likely the theater had not been cleaned in a very long time and the details were hidden.  It was just an old theater then, and I was too young and foolish to look around.  After all, I was dreaming of my future husband while seeing West Side story for the first, only to discover later that he was thinking of me also, because he thought I looked like Maria.

But Saturday night, while I waited anxiously for "The General" to begin, I took a good long look around.  I only wish I had taken pictures of the lobby.  It is breathtaking.
As the organ music began, I forgot all of the beauty and focused on Buster Keaton.  He wowed me again as he always does.  I have seen The General several times but this was the first time on a large screen and with the organ adding to the excitement.  If you have never seen a silent film, you should give it a try.  You can rent them from Netflix and other places, too, I suppose. What Buster did for the film industry was amazing.  To this day The General is rated in the top 10, of all movies EVER produced, and that includes all genres.  There was no CGI, only pure genius and maybe a little bit of stupidity with the death defying stunts. Buster always called Muskegon his home, and we are proud to call him our favorite celebrity.

Please read Ruby and Sal first if you haven't started the trilogy, and then move on to Maisy and Max, where you can get a touch of what life was like when Buster Keaton lived in Blufton, a lakeside community in Muskegon.  And if you ever get a chance to get inside the Frauenthal (there are concerts and other activities there regularly) do so.  You won't regret it. 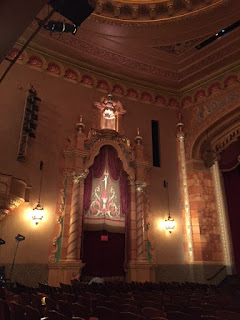 Starting today The Tangled Roots of Bent Pine Lodge is only $.99 on a Kindle Countdown, which means tomorrow it will be $1.99, and then the next day it will be $2.99.  So get in on the deal, and read my first series.  It's a clean romance set in West Michigan (although the names of the town are fake, but I know where they are.) Have fun! https://www.amazon.com/dp/B00NKLQ4WO
Posted by Jane O' at 4:13 PM No comments: